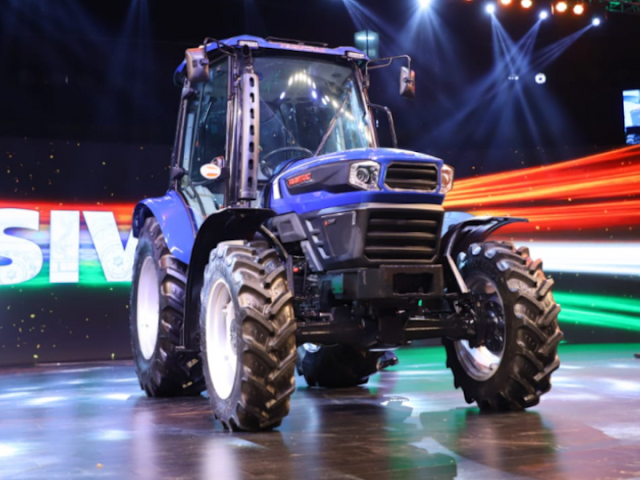 Union Minister for Road Transport and Highways Shri Nitin Gadkari has said that the government is working towards achieving increased income for farmers by lowering costs and creating job opportunities in rural India. Launching India’s first-ever diesel tractor converted to CNG, here today in the presence of Union Ministers Shri Dharmendra Pradhan, Shri Parshottam Rupala, and Gen (Retd) Dr. V K Singh, Shri Gadkari said, the most important benefit for the farmer will be to save more than one lakh rupees annually on fuel costs, which will help them to improve their livelihood.

The Minister said CNG is a Clean Fuel, as it has the lowest content of carbon and other pollutants. It is economical as it has zero lead and is non-corrosive, non-dilutive, and non-contaminating which helps in increasing the life of the engine and it requires less regular maintenance. It is cheaper as CNG prices are far more consistent than fluctuating Petrol prices; also the average mileage of CNG vehicles is better than that of Diesel/Petrol driven vehicles. It is safer as CNG tanks come with a tight seal, which reduces the possibility of explosion while refueling or in the event of a spill. Shri Gadkari said it is also part of the Waste to Wealth movement, as stubble (Parali) can be used as a raw material for producing Bio-CNG which will help the farmers to earn more. Replying to questions on when CNG-run tractors will be available in India, the Minister said the diesel-converted CNG tractor, done jointly by Rawmatt Techno Solutions and Tomasetto Achille India, is currently an experimental pilot project, and this would happen in due course.

Union Petroleum and Natural Gas & Steel Minister Shri Dharmendra Pradhan said that India is 3rd largest energy consumer in the world but per capita consumption is only one-third of the global average. He said that energy consumption is going to increase in the country and renewable energy sources will play an important role in this. PNG and CNG supply will reach 85-90 percent of the population in a few years. Shri Pradhan said that an alternative energy model based on clean sources is developing, and this will help in meeting the country’s commitment to COP 21 for a reduction in pollution. He said that  5000 CBG plants will be set up under the SATAT program. There is an estimate that about 600 million metric tonnes of biomass from farms, forests, and cities are available.

Safe: CNG tanks are tightly sealed.  Therefore, the chances of an explosion or fire during refueling are very low.

Get more engine life: it has been converted to new technology.  Therefore, the life of the CNG engine will be longer than that of traditional tractors.  CNG fitted tractors do not contain lead.  Because of this, the engine will work longer.

Get more average: CNG tractors will also get a higher average than diesel.  Therefore, using this will reduce the cost of fuel for farmers.

“CNG is the future,” the ministry said.  There are currently 12 million vehicles powered by natural gas worldwide and many companies and municipal corporations are adding CNG vehicles to their fleet every day.  This is the first CNG-powered tractor in India.  CNG tractors also produce more or similar power than diesel engines.  CNG engines emit 70% more than diesel engines.  The current price of diesel at Rs 77.43 per liter will save farmers up to 50% with the help of this tractor as the current price of CNG is Rs 42 per kg.

Conversion of the waste to wealth will not only empower the farmers by providing additional income to them but also help in reducing pollution, improving health outcomes, and making the cities clean. He assured that a decision will be taken soon for allowing the retail outlets to sell the CBG. The minister said that 8.5% ethanol blending in petrol has been achieved and soon India will be the number one country in ethanol blending