Ahmedabad ranks third among livable cities in the country » MaruGujaratDesi 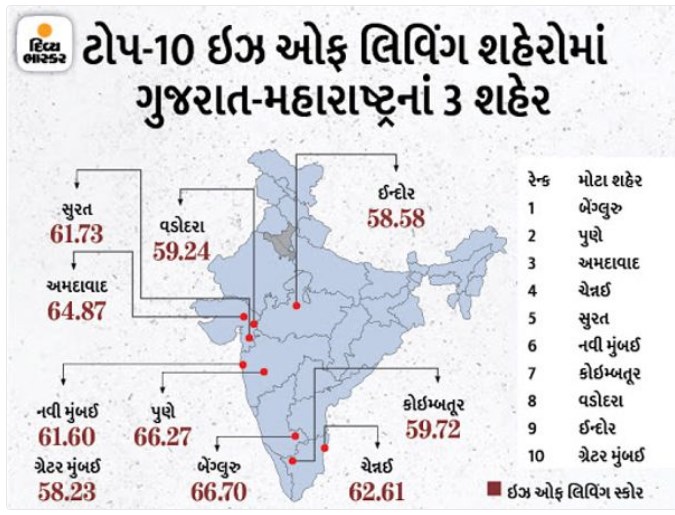 Ease of Living is a list of the best cities in the country to live in. Three cities of Gujarat are involved. In the top ten list released by the Government of India, Shimla ranks No. 1 among the best and least populous cities in the country’s metro city. While Ahmedabad is ranked third in the top ten. Surat is fifth and Vadodara is eighth. Apart from this, Pune is at the second position, Chennai at the fourth position, Navi Mumbai at the sixth position, Coimbatore at the seventh position, Indore at the ninth position and Greater Mumbai at the tenth position. Ease of Living Index and Municipal Performance Index are included in the list released in 2020

3 cities of Gujarat also in the top municipalities

While three cities of Gujarat are included in the top municipalities of the country. In the list released by the Government of India, Surat is second, Ahmedabad is sixth and Vadodara is 10th. Indore is at the top in the country. Bhopal is in third place, Pimpri Chinchwad in fourth place, Pune in fifth place, Raipur in seventh place, Greater Mumbai in eighth place and Visakhapatnam in new place.

In terms of Ease of Living, Shimla is No. 1 among the best and least populous cities in the country. Thus, Delhi is ranked 13th. The top 20 cities include Madhya Pradesh’s Indore, Bhopal, Chhattisgarh’s Raipur, Gujarat’s Ahmedabad, Surat, Vadodara and Rajkot, Maharashtra’s Pune, Navi Mumbai and Greater Mumbai. This is reflected in the EID of Living Index and the Municipal Performance Index 2020 released by the government.

Indore is the No. 1 city in the country based on the Municipal Performance Index. The index is based on 20 sectors and 100 indicators of 114 municipal corporations. Among the million-plus cities, Indore, Surat, and Bhopal are in the top-3. New Delhi, Tirupati, and Gandhinagar are the top 3 cities in the low population or urban corporation.

Bhubaneswar is the best city in the country in terms of citizen perception. This is followed by Silvassa, Devnagare, Kakinada, Bilaspur and Bhadalpur. The Citizens Perception Survey has taken feedback from 32.5 lakh people in 111 cities.

Ahmedabad ranks third among livable cities in the country